It’s hard out here for an app

A few weeks back I had the pleasure of joining colleagues Dr. Krishna Udayakumar, Dr. Ricky Bloomfield, and Dr. Bernard Fuemmeler on a panel discussing, Should there be an app for that?

Mid-rant that day, I found a tune floating (Ally McBeal-style) through my mind. Although I [uncharacteristically] repressed it then, I can do so no longer. Here goes:

Look, I am utterly bullish on the digital health market in general and apps specifically. But you can’t market enthusiasm [unless you’re Lil’ Jon]. And it’s the marketing of mHealth apps that presents some challenges to developers, particularly we academic ones.

The challenge? I call it The Rule of 70%.
TL; DR: People don’t download new apps, and when they do, they don’t use, and when they use, it’s not for long. 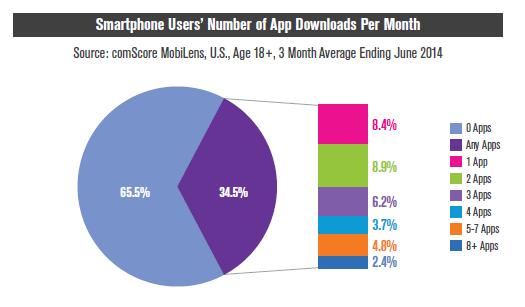 2. When they download new apps, most don’t use them very often. Nearly 70% use a new app 10 or fewer times; more than a quarter only open an app once.

3. When they do use an app, they don’t do it for long. Nearly 70% of time spent in the top 3 apps (and the biggest time leeching app is [“duh”-alert] Facebook).

There is your challenge. So what’s left for those of us who are slogging away in those under-loved categories, like health/fitness (and weather for that matter)?

Here are a few thoughts:

Make it stick, because people stop using apps pretty quickly. We’ve had a lot of success with this in research settings — our last study had 76% retention at 1-year. But many commercial apps struggle with stickiness. Digital health apps have a head start, as people are less likely to stop using relative to other categories (e.g. games). But if your app is opened only once in the first week, you have a 60% chance that they’ll stop using.. (BTW — wondering about our secret sauce? Ask for regular interaction and then use behavior change theory to figure out what feedback to provide).

Find a new distribution model. If you’re marketing to consumers, it’s unlikely that you’ll get many downloads, particularly after your initial launch. I know you have the next Facebook, but it’s unlikely that anyone outside of The Valley or The City will find you. This piece from Unread developer, Jared Sinclair recent went viral because it offered a rare glimpse inside the books of an independent app developer. And the view isn’t pretty:

Half of the lifetime sales of Unread were generated in the first five days. It would take another 170 days (24 weeks) to generate that same amount again… I conclude from all this that anyone who wants to make a satisfying living as an independent app developer should seriously consider only building apps based on sustainable revenue models.

This is a challenge in today’s digital health, because many users are young and [snacks, soda, and ETOH aside] pretty healthy. However, we need business models that target niche conditions and varying market segments (health systems, EHR vendors, HRA vendors, providers, consumer products companies, pharma). Researchers — you can’t ignore this one. If you’re deciding between making a standalone app, or one that connects with an EHR decision support tool, the latter will be a better dissemination bet.